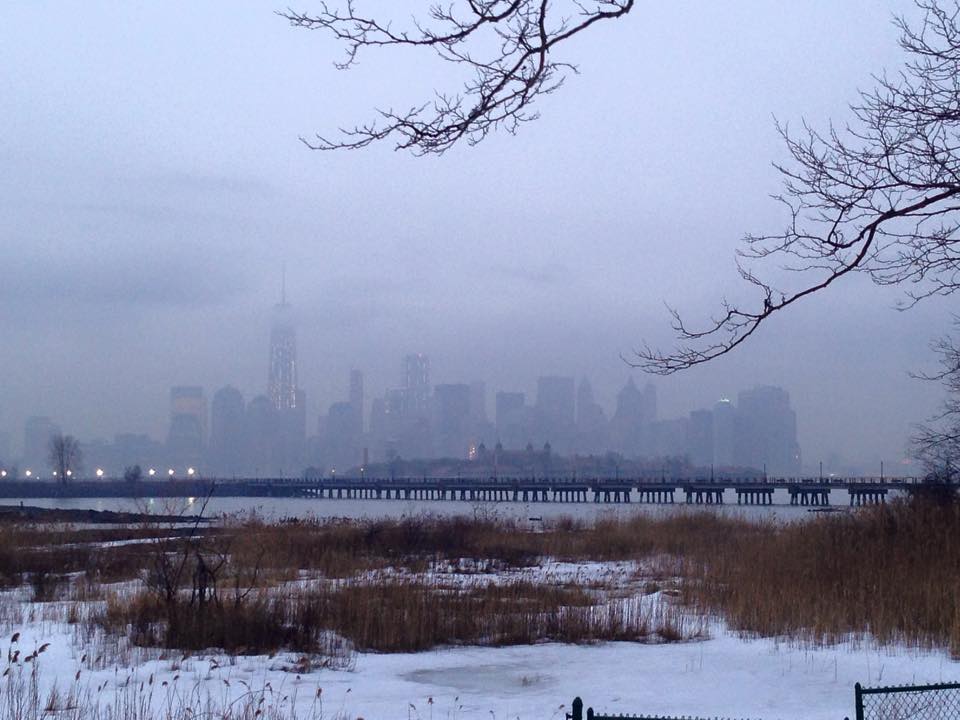 This was it. The end. After 3 weeks travelling cross country through the southern states of America with this eclectic bunch of people who had now become friends, today we would reach our final destination of New York City and say our goodbyes. But first we had today’s journey ahead of us with a stop in Philadelphia then New Jersey for our final group meal. So after a busy couple of days sight-seeing in Washington D.C., we loaded our luggage onto the Trek van’s trailer for the very last time.

En route to Philadelphia, we passed through the state of Delaware but unfortunately didn’t stop, not even for gas, leaving me uncertain as to whether I could officially say it was a state I had visited!!

Our first stop once we reached the city was on the outskirts at 9th Street where two rival Philly Cheese steak vendors sit across the street from each other. Both restaurants are popular with locals and tourists alike with queues often reaching around the block. We were given the choice of which we got lunch from and faced with an impossible decision, all ended up following our Trek guide to Pat’s. In hindsight, we should have split up, ordered cheese steaks from both and then halved them between us so we could have tried both but I guess I’ll just have to return to try a Geno’s cheese steak another time! I went for the basic sandwich with steak and cheese whizz and it was one of the most delicious things I had ever tasted !

Once we’d all eaten, it was back of the van to head to the main historic district of the city. We parked by Independence Hall and were given a hour to look around. We all joined the short queue to see the Liberty Bell. It was a lot smaller than I expected! Then we broke off into smaller groups. We wandered around the outside of Independence Hall as unfortunately, entrance was by advance ticketing only and there were no tickets available for the current time, and then walked down to the tomb of the unknown soldier before going to a visitors centre to get some souvenirs.

At the request of one of our group, we made one more stop in Philly at the Philadelphia Museum of Art. This is where the famous scene from the Rocky movie was filmed and we all did our best to run to the top of the steps in one go!

From Philadelphia, we drove towards the last state of our trip – New Jersey where we’d be stopping in Jersey City at an Italian restaurant for our last group meal, pizza, and then there was just one more stop left, at Liberty Park to view the Manhattan skyline.

Unfortunately, as for much of our trip, the weather was not on our side and we arrived to torrential rain and heavy cloud obscuring a lot of the view. After one final group photo, we boarded the Trek van one last time and headed to the gateway hotel in Elizabeth, New Jersey. Only a few of the group were staying there, most of us had booked accommodation into the city. All but one group member, who had a flight out that evening, had planned to meet up in the city that evening so, our guide let those staying in New Jersey drop their luggage then took us all to the subway station.

After saying our goodbyes and thank-yous to our guide, we all caught the subway into Manhattan, briefly separating to drop bags at our various hotels & AirBnB’s before reuniting in Times Square an hour later. Not wanting our experience to end just yet, we made plans to meet again the next morning for breakfast and spend time in the city together.

The next day, the group started to shrink as one by one, members drifted away to catch flights or just do their own thing. A few of us stuck together to do as much sightseeing as we could in day before 2 members caught a flight home that evening.

We began downtown, visiting Battery Park for a slightly clearer view of the Statue of Liberty than we had had from Liberty Park the previous day then walked half way across the Brooklyn Bridge before catching a subway uptown to window shop along 5th Avenue and go for a walk in Central Park. Lunch was at Ellen’s Stardust Diner, where the singing waitstaff just happened to sing ‘Let It Go’ which had, with the weather we’d experienced, become our Trek tour anthem! Then we ended the afternoon with a trip up to Top of the Rock before saying goodbye to those who had to get to the airport.

That evening, I went alone to watch Kinky Boots on Broadway after queuing at the Time Square TKTS booth to get discount tickets and then met up with the only group member remaining in the city to take a late night trip up the Empire State Building.

The next day we met up again at Chelsea Market and after strolling through past all the food vendors, spent some time walking the Highline, one of New York’s newest green spaces formed from reclaimed land from an old elevated railway track.

From here, we took a subway to Brooklyn to explore the galleries and bookstores of the DUMBO area, take a ride on Jane’s carousel and enjoy the impressive views of downtown Manhattan before walking back across the Brooklyn Bridge to Manhattan then it was off to Greenwich Village where we tried some cupcakes from Magnolia Bakery on Bleecker Street.

After another trip to the theatre that evening, this time with discounted tickets to see Jersey Boys on Broadway, it was time to say goodbye to the last of my Trek companions.

It was odd returning to being a lone traveller the next day, eating breakfast by myself at the IHOP and walking around the city alone. I had a few hours to spare before heading to the airport to catch my flight that evening so I decided to join a ‘free’ walking tour of Grand Central Station and the surrounding area that had been recommended t me by a friend. The tour was really interesting and we got to see inside buildings in the area that are otherwise off-limits to the general public.

Walking tour over, I strolled back to my midtown hotel to pick up my luggage then across the road to Penn Station to catch the train to Newark airport and await my flight back to the UK. It had been an amazing 4 weeks, travelling solo for the first time and joining a group tour for the first time and I was absolutely exhausted from the experience. But I had seen some incredible places and made some great new friends and I couldn’t wait do it all again!