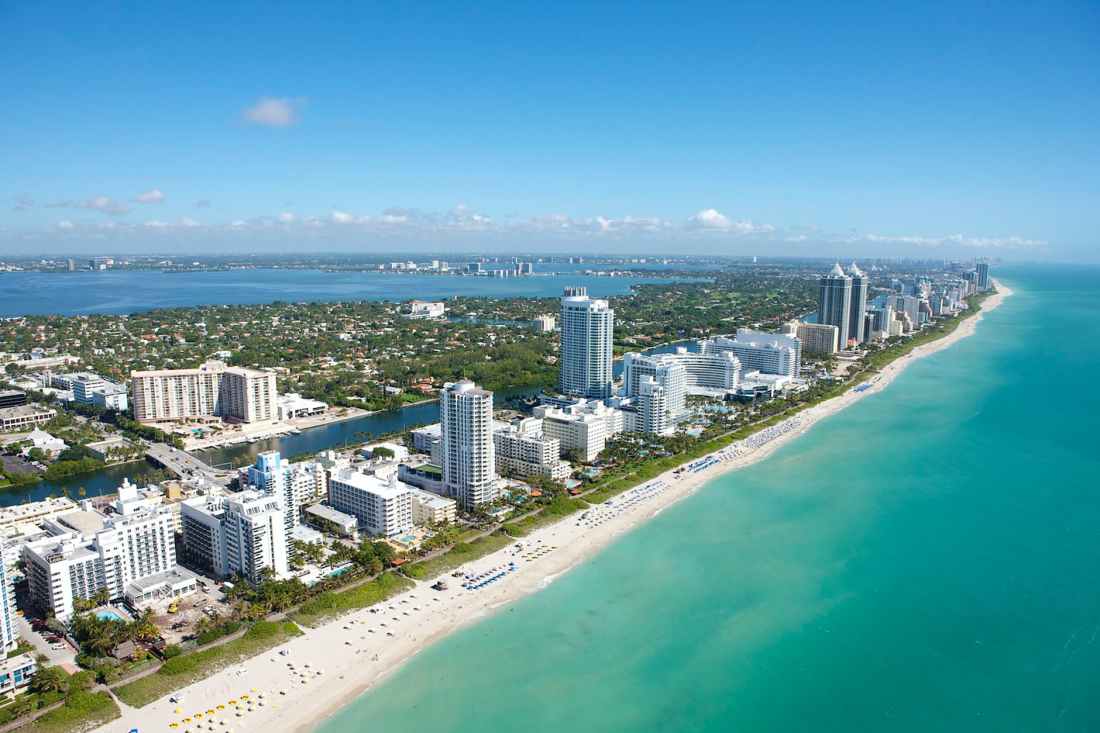 Starting our East coast road trip with one day in Miami

After spending months planning another adventure driving through the USA, it was finally time to set off. We’d be catching a morning flight from Heathrow that would have us in Miami mid-afternoon. Once through passport control at Miami airport, we followed signs to the station to catch a bus into the city. We’d researched which number bus to catch and which stop to get off at for our South Beach motel and as the stops flashed up on the screens inside the bus, it was a pretty straightforward – and cheap – way to get to our destination.

Once checked in, we went out for a walk. Our motel was conveniently located across the road from the famous South Beach so after heading north along Washington Avenue finding somewhere to grab a snack and popping into the few souvenir stores we passed along the way, we walked east along Lincoln Road Mall, a shopping and entertainment district and looped around to South Beach following the path that runs behind the beach south, parallel to Ocean Drive with all its art deco buildings.

The sun was setting by the time we reached our motel so being jet-lagged from travelling, we called it a night making sure we got plenty of sleep for the busy day we had planned for the next day.

Having just one full day in the city, we had decided to take a combo tour which would include a visit to the Everglades, a city tour and a sightseeing cruise on Biscayne Bay. From the reading on the booking site, we were expecting this to be one long day tour run by a single company where we’d be with the same group all day but we soon realised this was not the case but instead, 3 different tours run by 3 different companies tenuously linked together in a rather disorganised way!

After checking in for the tour at a Lincoln Road Mall tourist information centre, we were told we had some time to kill before our scheduled departure so we walked along to South Beach to get some photos with its colourful beach huts. Then, back at the tour company office, we were eventually shepherded onto a double decker bus to be ferried out to the Everglades.

After being dropped at the head quarters for boat trips in the Everglades, we were given a number depending on the type of boat trip we had opted to take.

Having taken a private airboat trip along the Platte River in Nebraska the year before, we had opted to take a standard boat trip this time. Once our number was called, we queued up to board a larger airboat and this took us through the swamps to spot some ‘gators. As we cruised through the Everglades, we made regular stops so our guide could talk to us about what we were seeing.

It was great fun speeding through the swamp land and we managed to spot a few alligators hiding in the lilies and reeds along the way.

After our boat trip, we were given the opportunity to watch a presentation about the alligators and to meet one then we were provided with a sandwich lunch before boarding the bus again to return to Miami.

Once back in Miami, we were expecting to begin our city tour straight away but instead arrived back to chaos as various groups of people all booked onto different combo tours etc were gathered trying to find out where to go. We were eventually told by harassed staff that the buses lining the road were not the ones we needed to catch and that our bus was running late so we used the opportunity to go get cold drinks to cool down from the heat returning just as our bus pulled in.

Our city tour turned out to be similar to a hop on/off tour bus. The bus had a live guide who gave a commentary as we travelled through the city along Ocean Drive, Will Smith’s Miami blaring out, and out towards the downtown financial area. We sat on the outside upper deck of the bus and typically, as we drove towards our first stop in Little Havana, it started to rain heavily. Luckily, it was just a short, sharp shower!

Once in Little Havana, we were lead immediately into a Cigar shop to try and entice some group members into buying something from there. After a quick look at the staff rolling the cigars, we made a swift exit and instead wandered down to ‘Domino Park’ where locals famously sit and play dominoes and chess. The heavens opening again, we found shelter looking around some of the local store then under a shop parapet until it was time to board the bus again.

Leaving our first stop in Little Havana, the rain stopped again but we were instead harassed by an alarming number of low hanging branches on some of the residential roads! It was lucky that there wasn’t really anything to see at this point as we all spent most of the ride ducking down between the bus seats to avoid being smacked by a branch! While we all laughed about it, it wasn’t the safest I’d ever felt on one of these sightseeing tours!

The tour continued towards downtown Miami but we found that there was still very little of interest to see along the way, or at least on the route we were taken.

We were dropped off downtown at the marina a couple of hours before our Biscayne Bay Cruise was ready to leave by Bayside, a large shopping and entertainment mall by the marina, so we spent some time looking around and having dinner at pizzeria there until it was time to board.

While we had enjoyed visiting the Everglades, the organisation once we returned to Miami and the city tour being a bit of a disappointment had put a slight dampener on our day but I was looking forward to our cruise and it didn’t disappoint. The views were beautiful, especially once the weather started to clear and the dark clouds dispelled and I enjoyed the commentary as we sailed pointing out some of the celebrity homes we passed as well as Miami landmarks.

By the time the cruise finished, we were exhausted by what had been a long and busy day. We once again boarded the city tour bus and were dropped back by Lincoln Road Mall from where we once again walked the short distance along Ocean Drive back to our motel.

Trying to see Miami in what was effectively one day was probably not the best idea in hindsight and I would have liked to have been able to take more really exploring the different districts and just to have spent more time around South Beach enjoying the atmosphere and relaxing. But the next day, we had to be up early to get to the airport and pick up our one-day hire car to drive to Orlando for a few days of Disney fun. I really hope I get to return to Miami sometime in the future and give it the time I feel it deserves.