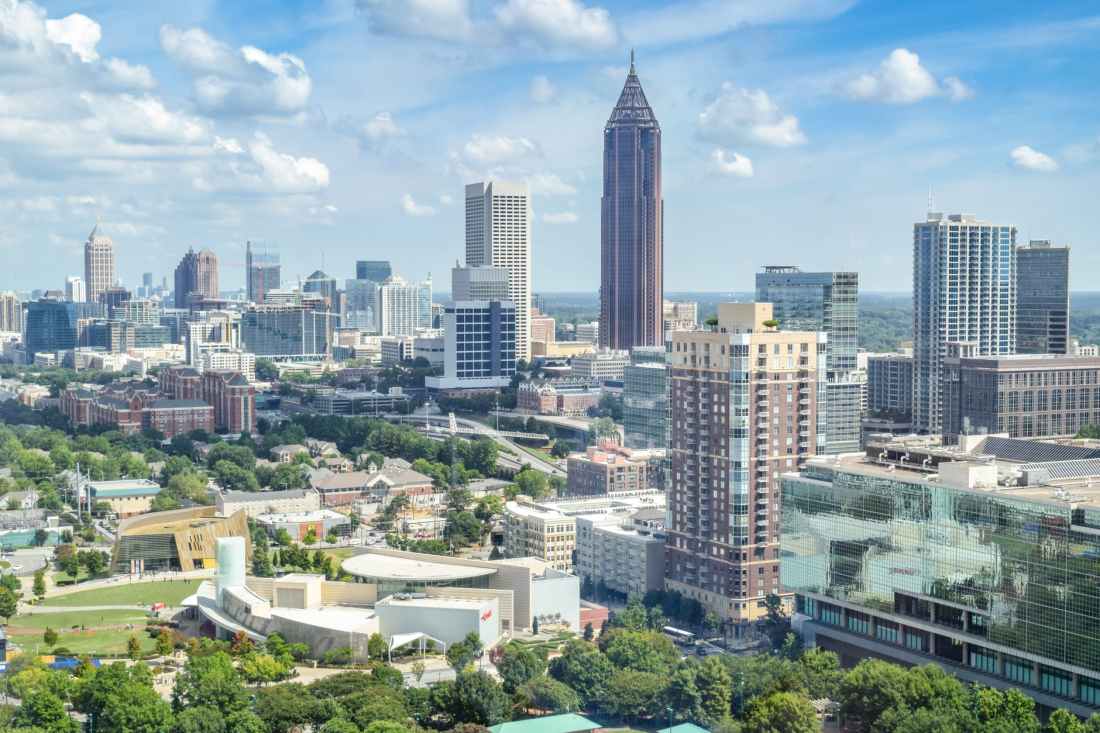 Despite our original plan to take a road trip along the East coast of the USA from Florida to Maine, we had made the decision to venture inland slightly for some of our trip starting with a drive West towards the city of Atlanta. We had so far driven through Florida for stops in Miami and at Walt Disney World, through Georgia to visit the city of Savannah and were now in South Carolina having just visited Charleston and Congaree National Park. Now, we’d be retuning to the state of Georgia for our next adventure.

Leaving our Orangeburg SC roadside motel early morning, we began our drive West, crossing the border back into Georgia about 90 minutes later. Only stopping for gas and snacks, it took just over 3 hours to reach our first destination of the day, the city of Covington.

Having recently binge-watched all 8 seasons of the TV show The Vampire Diaries, this stop was a late request to be added to the itinerary by me as the city doubles as the town of Mystic Falls in the show. The show was shot all around the surrounding area and it is possible to take guided tours of some of the filming sites but unfortunately these only ran on certain days of the week and didn’t fit with our schedule.

So I made do with a stop in the main town square, its clock tower instantly recognisable from the show and the Mystic Grill restaurant keeping its name to draw in tourists. We headed straight to the Tourist Information Office where we picked up free maps outlining some of the nearby filming locations from The Vampire Diaries and also some other films and shows shot in the area. Outside, stands the Mystic Falls welcome sign from the show and there was a display of some costumes and memorabilia from the show inside.

The Vampire Stalkers Gift Store selling themed merchandise and wooden – stakes for anybody worried about running into real life vampires – was fun to walk around and we walked down to see “Elena’s house” on a residential street just outside of the main square. Since the Mystic Grill‘s menu was a bit out of our price range, we then sat on a bench in the square to eat the snacks we had brought with us before continuing on to the nearby city of Atlanta.

The Vampire Diaries is not the only show or movie shot in or around Atlanta. Georgia has a thriving entertainment industry with almost as many film studios as Hollywood and with it being cheaper to film there, its a location used more and more often. There are a few companies offering guided tours of filming locations from the city of Atlanta, The Walking Dead location tours being particularly popular, and if I’d had more time or was travelling by myself or with someone else who watched some of these shows, I’d have definitely spent some time and money either searching out some more of these locations or taking some of these tours.

Instead, we arrived in Atlanta mid-afternoon and after checking into our city hotel, went straight out to explore.

While we found downtown area of the city to be rather generic and not particularly inviting or safe-feeling, the greener areas around the Olympic Park and World of Coca Cola were a bit more welcoming.

We had tickets booked for World of Coca Cola the next day but decided to visit the gift store now to save time the next day. The huge store sold every Coca Cola-themed product imaginable and was fun to explore.

We then walked through Centennial Olympic Park with its large open green spaces, many sculptures and Olympic-themed Fountain of Rings before taking a ride of the nearby Skyview Ferris Wheel. The ride gave us great views over the city along with a commentary on what we could see and some of the history of the city.

We then walked back towards the Peachtree Centre area visiting the mall before having dinner at the Hard Rock Cafe there.

The next morning, we checked out of our hotel after breakfast and walked back to the World of Coca Cola to take our pre-booked tour. The museum took us around various rooms explaining the history of Coca Cola.

Along the way we got to see the vault that holds the drink’s secret formula, meet the Coca Cola Polar Bear, sample different versions of the product from around the World and see memorabilia and old advertising from the brand.

Then, it was back on the road. We’d be spending the next night in a roadside motel in a corner of Alabama we were passing through but we still had a couple of more stops along the road in Georgia to make along the way!

First up, another silly roadside attraction in the form of a giant chair stood in a field in the middle of nowhere. Pulling up on the side of the road, we took photos of the chair before clambering up to sit on it.

Then our main stop of the day, Babyland General Hospital,home of the Cabbage Patch Kids. My travel buddy was a big fan of the brand of dolls and couldn’t contain her excitement as we pulled up to the large white building.

Inside, was a huge store full of Cabbage Patch Kids dolls and merchandise but also a doll hospital for any Cabbage Patch Dolls that needed a bit of restoring and a Cabbage Patch are under a Magic Crystal Tree where you can see Cabbage Patch Dolls being ‘born’ in a rather surreal ceremony! I found the whole thing a bit bizarre but my friend loved it so a great place to go if you are a fan and in the area!

A quick stop at a nearby Dairy Queen for lunch and ice cream and it was time to leave Georgia behind as we crossed the state line into Alabama, pulling over to grab quick photos with a famous ‘Sweet Home Alabama’ state welcome sign. Next up, a welcome return to Nashville, Tennessee!

Roadtripping through Florida and Georgia to the beautiful city of Savannah

After 2 nights in Miami and an exhaustingly full on few days at Walt Disney World, our road trip through some of the Eastern States of the USA was now about to begin in earnest as we picked up our car from the Alamo terminal at the Disney Swan Hotel. Maybe because it was a smaller terminal with fewer cars on site, but we go upgraded from the small size car we’d booked to a larger SUV.

With neither of us having any experience at driving something which seemed pretty huge to us (but seems a pretty standard car size in the US!), we were a bit wary at first but were soon cruising along the freeway towards our final destination of the day, Savannah, Georgia.

As with our previous US road trip, we had tried to plan regular stops along the way on each drive day at road side attractions and sites of interest. Today’s first stop was in the Floridian town of Christmas which, as well as having a Christmas tree on display all year round, is also home to Swampy, the World’s Largest Alligator (sculpture!). The huge sculpture sits outside the Jungle Adventures Animal Park and while we didn’t visit the park itself, it was fun to pose alongside – and in the mouth of – the sculpture!

Already running late on our rough schedule after delays picking up our hire car and our first stop, we soon hot roadworks causing us to divert. Finding ourselves in St Augustine, we stopped to grab lunch and supplies at a Walmart then followed signposts to Ponce de Leon’s Fountain of Youth, deciding it might be a good place to sit and eat lunch at.

If we’d had more time, it would have been fun to pay the entrance fee and actually see the fountain but after eating and stretching our legs, it was time to get back on the road again and cross the border into the state of Georgia.

We had booked a dolphin-watching sunset boat trip out of Tybee Island, on the outskirts of Savannah for that evening thinking we’d have plenty of time to make it but as we were till running late and hit more diversions around roadworks, it was looking less and less likely we would. Not having any access to the internet or being able to ring the company with the cost of calls from our UK phones, we had to make a decision whether to see if could make it or just give up and head straight to our Savannah accommodation. It could have gone either way so we decided to continue to Tybee Island and hope for the best.

Arriving at the departure point right around the time of departure, we quickly found a parking space and ran to the dock only to see the boat pull away and sail down the river without us.

Disappointed but not surprised, we drove into Savannah and checked into the hotel we’d be staying at for the next couple of nights, briefly venturing into the city to grab a snack before returning to our room.

The next morning,we were up early to get out and explore the city. Being early August, it was a hot and humid day as we wandered along the streets and through the pretty squares. We stopped at Chippewa Square, famous for being where the Forrest Gump bench scene was set. The bench he sat on in the film isn’t actually in the Square, it was a prop but the Square itself is very recognisable.

After passing some other Savannah landmarks including the historic Savannah Theatre and the huge Cathedral Basilica of St. John the Baptist, we found ourselves in Forsyth Park with its canopy of oak trees leading to its pretty fountain.

Next, deciding we needed to get out the heat and into some aircon, we walked to the Savannah History Museum to learn a bit more about the southern city.

We bought a combo ticket which also gave us access to the Jepson Centre, a contemporary art museum, which we made our next stop, and Owen House, one of the city’s historic homes.

Our tour of the large house was really interesting and our guide even gave us some recommendations for our upcoming stay in Charleston, SC.

Following our tour of the historic home, we walked down to the waterfront, strolling along the banks of the Savannah River and visiting some of the shops there.

We then walked through the busy City Market area with its many shops and restaurants before returning to our hotel to once again cool off in some air-con!

That evening, we returned to the waterfront, visiting one of the River Street restaurant bars for dinner.

While the heat had taken some getting used to, Savannah had been a really beautiful city to spend a day exploring! We’d be briefly leaving he state of Georgia the next day to visit Charleston in South Carolina but we were looking forward to returning later in our trip to spend some time in and around the city of Atlanta.